In the first two games, both players got a few no lets, and neither appreciated it much! But it kept the match flowing beautifully, and when you have two attackers/retrievers on a warm court, you have a few shots in the middle, bouncy and all. Well done to the ref.

I have been following Aly for a while now, in his USA College career at Penn Uni, and I thought he might create an upset here – as he nearly did last year, a 3/1 loss in 80m against Youssef Soliman.

Omar made a few errors but he HAD to go lower as the ball was bouncing very high, and he had to take risks to put pressure onto his young opponent.

To be honest, it was a bit of a toss of a coin in all 4 games, I find remarkable how fair and clean the match was. Because of the conditions, it could have been a pretty tricky encounter.

So sad to see the Hammer of Thor going out so soon, and delighted for the 10 years coming to Gouna young contender who makes it to the next round.

“I had the expectation that Omar was going to be a class act. like solid, all the basics, but also plays great squash. He is so experienced, he was three in the world not a long time ago. He doesn’t play just play at the back of the court, if you open the court, he is going to take the opportunity.

Coming in from the beginning, he was so solid, and I saw it right away. so I had to be patient but at the same time move him around. So I had to make sure I kept the balance right between not opening the court too much and yet move him. It was a mental balance to find and try to be physically stronger.

I don’t know if you remember, but he did an interview last year in the same spot, and I told you that I would be back… And it’s such a pleasure to play somebody like Omar, he is super respectful on court, he was very nice to me, I’m just over the moon right now.

I need to go back and study Saurav’s game a little bit but he is having a fantastic season, he reached the semis of the TOC, and had an epic match with Diego (Elias) and Youssef Ibrahim, so I know he is a tough player but I have nothing to lose.

I am enjoying my squash, enjoying every moment, and I’m going to enjoy every moment of that opportunity, hopefully bringing my A game. I just love it here, I’ve been coming to this event for the past 10 years, every single time, and I have been growing up watching this. So just been able to have the opportunity to play in this event, less alone compete with these guys, means the world and motivates me, and I’m just over the moon…

I just need to recover and get ready for a battle tomorrow. 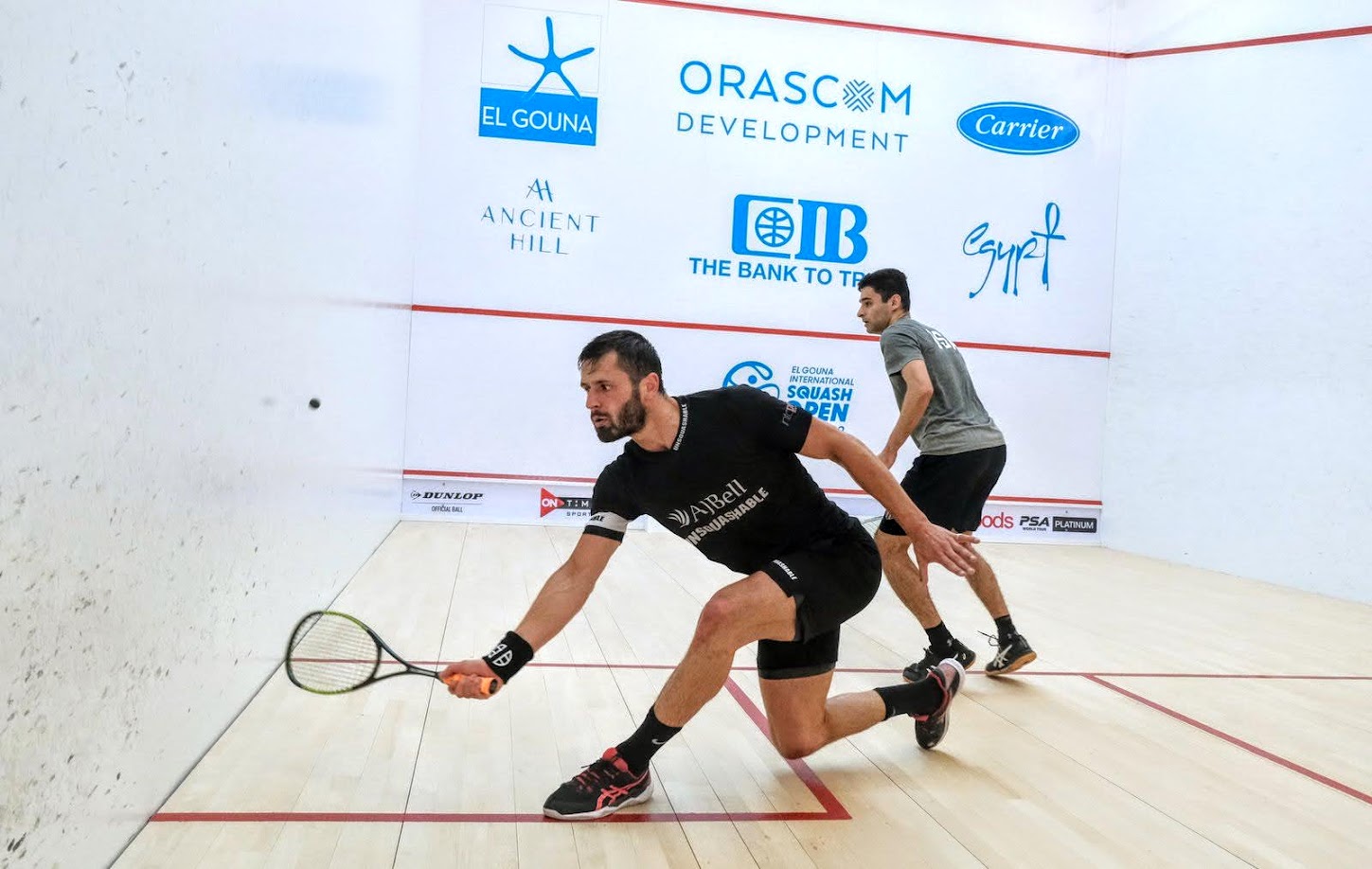 He is quite quick, fit, yes, he surprised me really, I thought I was quite lucky there. I don’t think I played my best, and if he nicked the fourth game, it would have been tight but a win is a win.

I have got to improve a lot to get close to Tarek tomorrow. I can’t play at that level, or I’ll get battered. I never played him before, I’m looking forward to it. I don’t think my lungs are but… he is tough!

It’s good to win, but I wasn’t that happy about my performance really. He doesn’t give you any rhythm, you don’t think he is going to get a lot of balls back but he scramble along quite well.

It’s good experience to play any of the top 10 in the second round. I have done quite a lot but I never seem to get passed it! So it would be nice to get pass one of them…, I’ll see how it goes, and I’m just to get in the sun, and brown now, that’s what I’m going to do!