Hania comes down from hell to reach heaven

Like Hania said in her acceptance speech, ‘I don’t know where to start’. I guess it was a game of three halves.

First, a Gazelle flat as a cold baladi bread. I rarely saw Hania playing that badly in all the years I’ve been following her. Yes, you could argue that it was all credit to Nouran, I would mention the stats:
In the first game, Hania, 5 errors (4 in 5 points at the end) and conceding a stroke, that’s 6 points given away. Wait for the second game: 6 errors and two strokes conceded, that 8 points. That is not the Hania we are accustomed to.

She is sinking even lower in the third, conceding a stroke in a three shot rally, then making an error. That is just too much for Nevine, Hania’s mum. She stands up and leaves the VIP area.

And to be honest, I felt for her at that moment, because it was painful to watch: her backhand drives were non existent, finishing in the middle of the court, wrong shot selection, no pace in the ball but too much pace to actually slow Nouran down. Like I said, painful.

The turning point seems to be a rally, 2/3 Hania serving, which went on for quite a while. Hania finally was playing a bit of squash. And although she made an error at the end of the rally, she went “yes” with her head, shaking it like when she does when she is calm and collected.

And from that moment on, second half of the match. 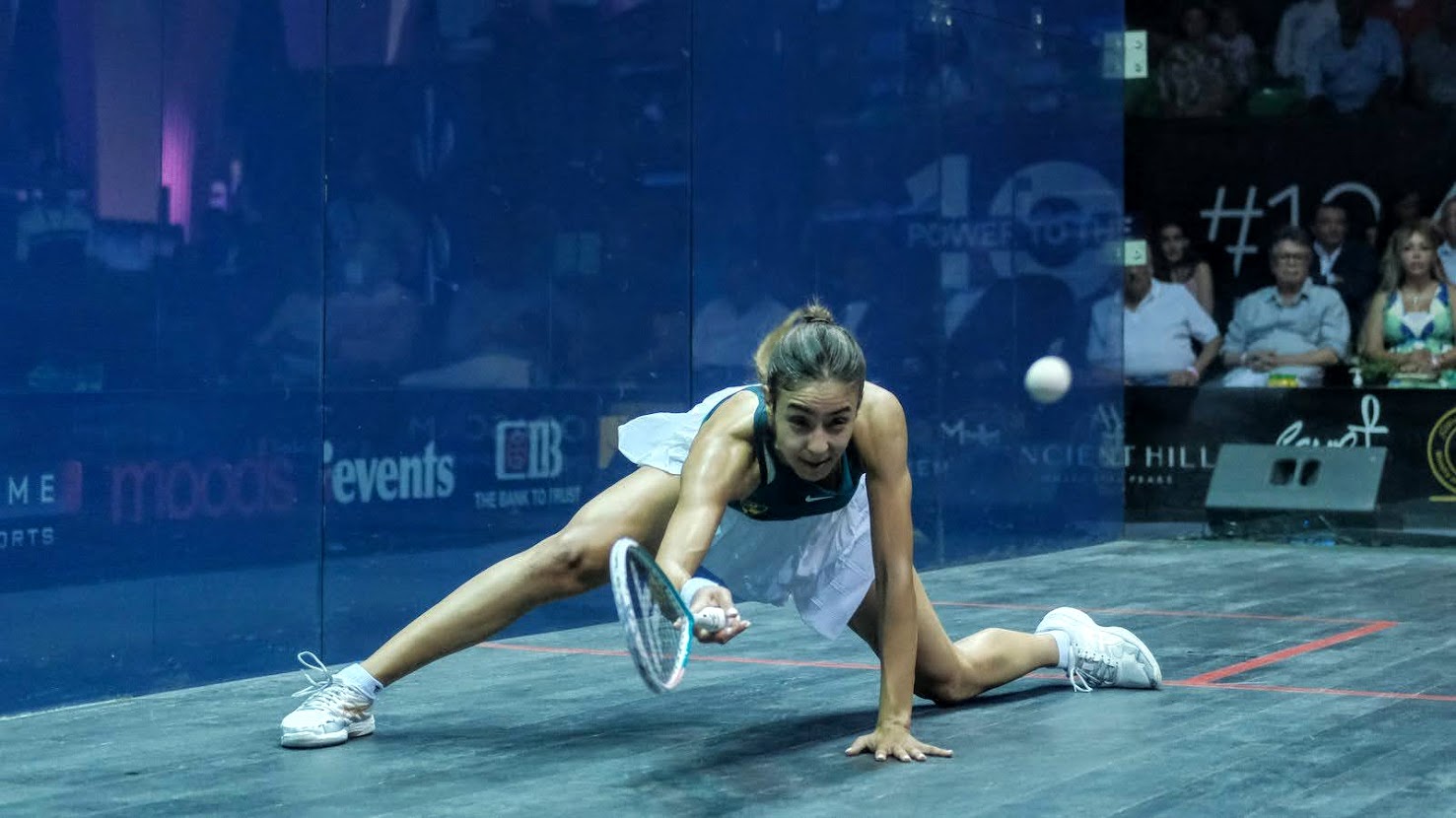 Stil a couple errors from Hania, but Nouran is a bit lost, and it’s Hania 9/6, 10/7. A superb winner from Nouran, the temperature is very warm again, the two girls must be suffering. 8/10. A magnificent rally from both girls, and after a video decision let, Hania is back from the dead, 11/8 in 17m.
The Gazelle still gave 6 points away but Nouran also gave 4 away. The gap was closing fast.
We started with a bit of a delay the fourth as Nouran was bleeding. Also, Nouran had requested a new ball… That game is THE match.

25m. 0 error from Hania, conceiding 2 strokes. Nouran, 5 points given away, 3 errors.
I’m going to make my life simple: not a point between the players from the first rally to the end. And if you are looking for the definition in the dictionary for “giving it all”, you’ll see the names of Hania and Nouran. 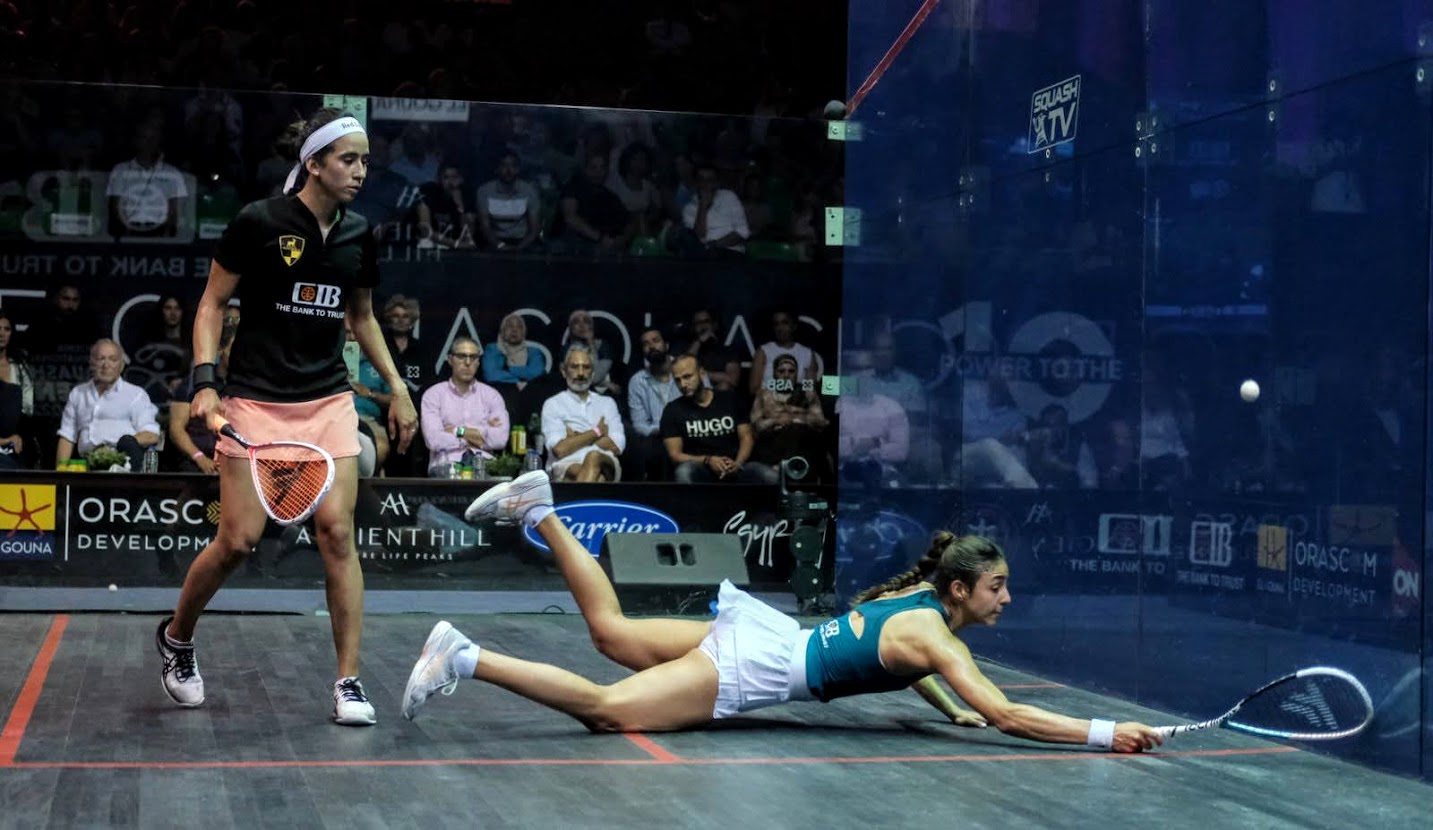 Absolutely incredible. Seriously ridiculous, mad, amazing, magical squash, with Nouran speeding up the pace, and Hania trying to take the pace out.
And still that big battle on the backhand side of the court. In my opinion, that’s where Hania lost the first two games, and won the next three. 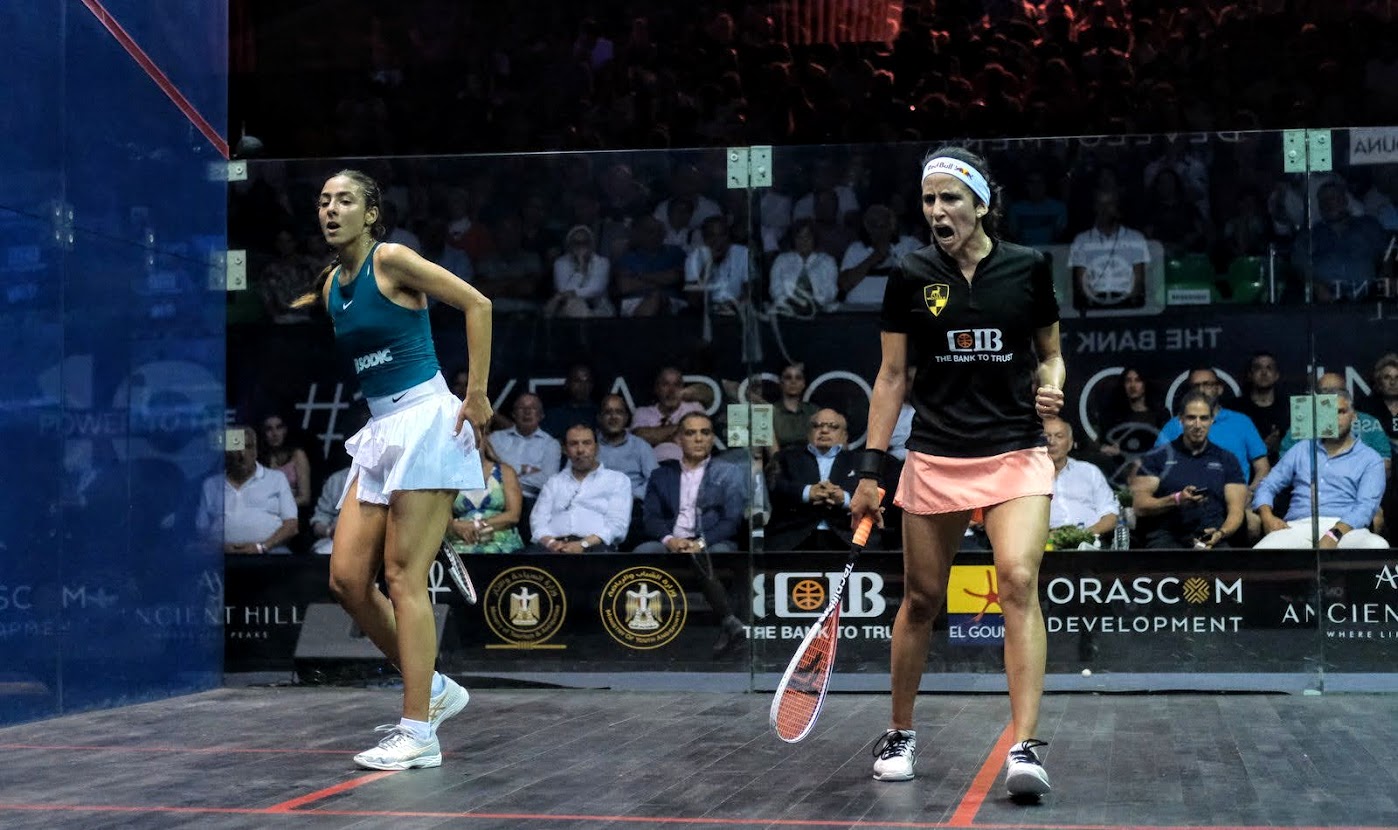 Like Nouran earlier, Hania had a blood injury, 5m stoppage, on her right hand. We are at 7/7, and been playing for 13m. We start again on the 17th minute. The video ref is pretty busy I have to say in that game.

8/8. 9/9. Nouran unable to score more than one point, and we get back level. Another gruelling rally, Hania in control, Nouran retrieving, but the Gazelle gets the next two point, 11/9.

And there, she goes “HULK” on us. I kid you not. After closing that game and levelling 2/2, she screams COME ON with a Hulk Body Builder Pose. Incredible. The crowd LOVED IT!

At the start of the decider, Hania gets another blood injury, and ends up looking like a Rugby Player, bandage everywhere, bless her. Nouran not too happy about some drop of blood on the floor, and about the fact that Hania was again having a blood injury stoppage. I guess in her mind, that was time for Hania to rest probably?

And like Hania’s mum before, Nouran’s mum couldn’t take the pain of seeing her daughter’s distress, and left the VIP’s at 9/4….

“I was watching from above” confessed Hania’s mum Nevine. “I just couldn’t take the pressure anymore…

It’s not to the players we should be the trophies. But to their poor parents…

Another final reached for @NouranGohar this week 👏

Here are her thoughts on the final and the tournament 🎤#ElGounaSquash pic.twitter.com/21A9bSJY5X

“A week ago I lost in the World Championships, I didn’t really feel like I was ready to come here and play my best squash and also being able to beat the World No.1 and 2 in the same tournament is a huge step for me, I’ve never done it and its mentally huge for me. I felt like coming here I have to show up, do my job and try as much as I can to play my best even if I’m not feeling like it. I wasn’t happy with what happened last week in the World Championships and I was disappointed and this week I felt like the hard work paid off so I’m definitely over the moon with this.

“Yeah I think to beat Nouran you have to keep digging in and I don’t know what else I could have done so, I was thinking at 2-0 down that I was rushing and making a lot of errors and I wanted to keep digging and keep putting in a performance and slowly I got back to playing my best so I’m very happy with that.

Like Nouran said, it’s been a long season, the fact I managed to get two titles out of this season is absolutely amazing for me. I played a few finals, but I didn’t managed to win that many!

Nouran showed why she is world number one as she said, she reached maybe all the finals this season, so she has been the most consistent. So to be able to beat her in the last couple of events is just amazing and new for me.

It’s such a rollercoster, full of emotions, like I said, I’m really happy to win this tournament after last week disappointment at the world championships.

I want to thank all the people behind this win, my team, my coach, Haitham Effat, we shared so many tournaments and so many years together, and maybe this is one of our last tournaments together, so I’m really happy to be able to do it with him.

My family who was here, my sponsors, CIB, Mr Hussein Abaza for the huge support he is giving this sport, Sodic Estate, Wadi Degla Captain Karim Darwish for everything they’ve done, and Tecnifibre.