Kidding but officially, World Juniors, British Junior different age groups, PSA, Marwan always won. Sometimes tough matches, Abou was getting close, but no cigar. Apparently, in 2010 he managed to take a win, I guess on the Egyptian junior circuit.

What happened today? Abou played extremely well OBVIOUSLY, accepted the challenge proposed by Marwan, as in patiently waiting for the opportunity, accepting that Marwan was not putting any kind of pressure in his shots, for suddenly out of the blue changing the pace and the angles, keeping the lines tight to the wall, not giving too much free points… It was a tactical cat and mouse, all in the head… 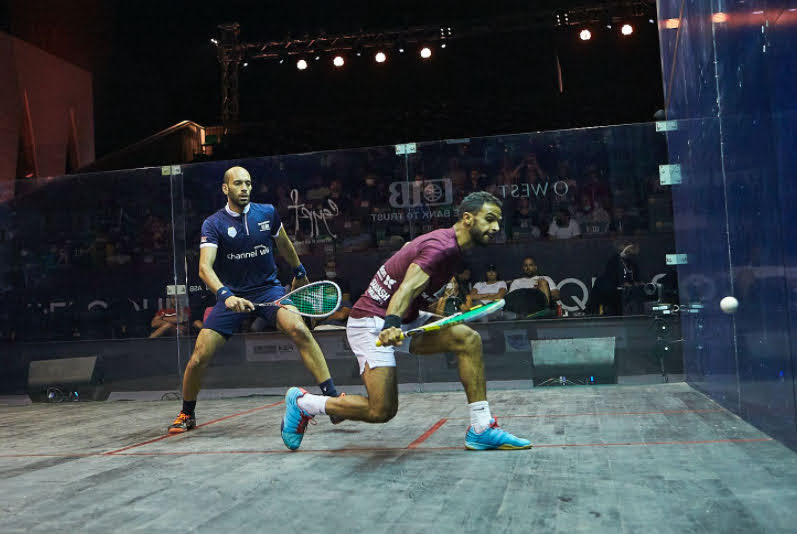 But there was one new element today I feel. Marwan is now the Hot Player, the Top Dog. And sometimes, it’s easier to be in the pack chasing the Top Dog than actually heading the race. I feel the pressure today got to Marwan. But he will learn… He has learned everything else…

As for Abou, he deserves a break, bless him. When you have first rounds like Simon Rosner in Chicago, Fares in Canary Wharf, Joel Makin in Qatar, Ali in BlackBall, and Marwan in Gouna, you can have a bit of a break… 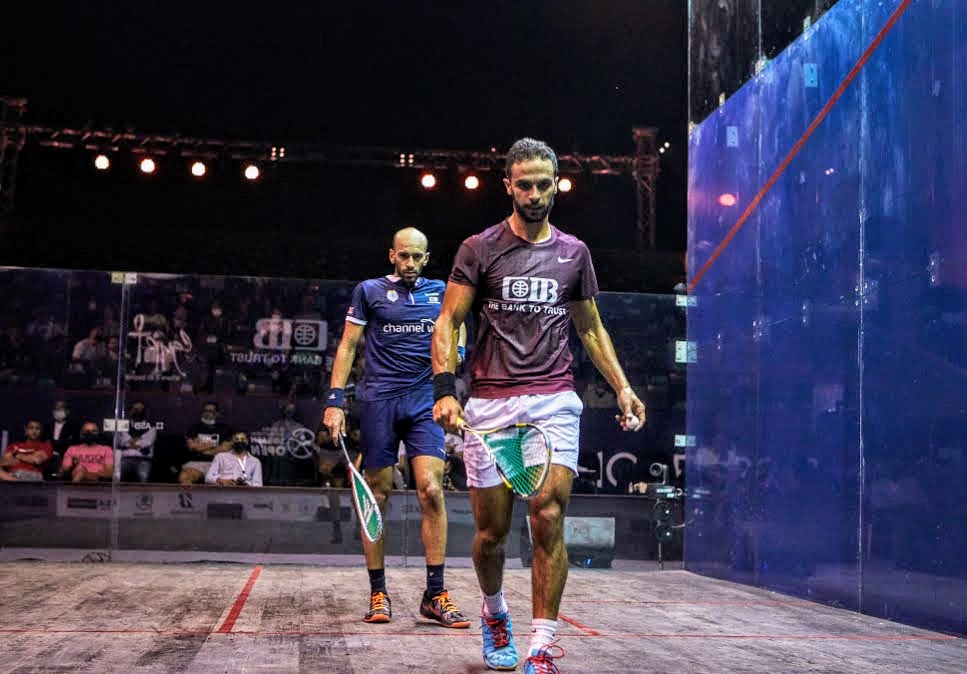 “I had nothing to lose. He has been playing great, he’s the man of the hour. For me, getting on court I wanted to enjoy myself and take it one point at a time and see how the match unfolds. I’m happy with how I held my head throughout it.

“I’ve lost a lot of matches being 8-3 or 9-3 up, so when I was leading I was thinking one point at a time and not think too fair ahead of myself and play each point like it was the last point. It worked for me, when I went from 9-3 to 10-3, I had to check the score because I didn’t know.

“Against Marwan, you don’t want to leave anything in the middle because he’s lethal. I’ve played against him and lost to him so many times, I learned my lesson and I played more accurate squash and I’m happy it worked.

“I’ve always challenged the top guys but I was losing more than I was winning. The mental part played a big part in that, so I had to find the balance and work on that. Not just attack everything and I’ve been working on that.”

🗣 "He's the man of the hour… I tried to enjoy myself and take it one point at a time."@mabouelghar reacts to his first PSA win over @maelshorbagy 🎥 pic.twitter.com/9X2YqMTLzc

Boy that match.. The score doesn’t tell the whole story for sure…

First of all I haven’t seen Mohamed that focused for a very long time. Every time he wanted to interact with the ref, he would stop himself in mid sentence, or when he was about to criticise himself because of a bad shot, or a wrong choice of shot, he would start and then stop. 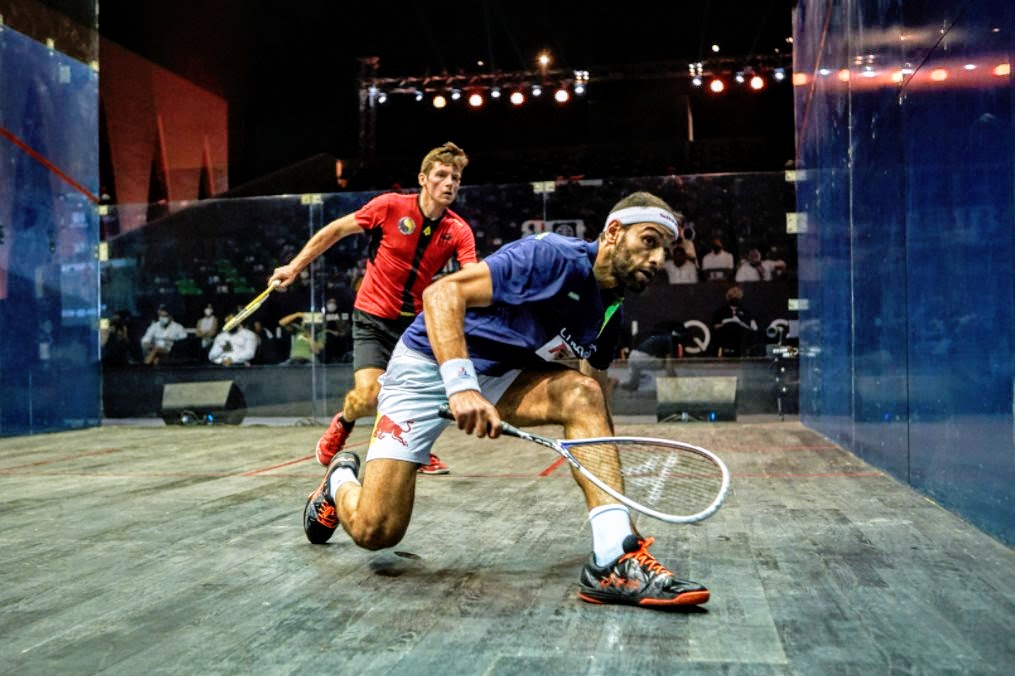 That is obviously something he’s been working on.

First, pace was ridiculously high and all credit to Greg to keep it going that long. The work he is doing with Nick and his team is showing – literally as you can see the 6 packs through the shirt! There was a rally in particular in the 3rd, at 6/4, Mohamed through everything AND the kitchen sink at Greg. The poor boy covered as much ground in that rally as I walk in about a week! And he still won the point, and he still was up for game after that. Incredible fitness.

First game is Mohamed being more in control, making Greg do a lot of work, that paid off in the second.

As he mentioned in his interview, Mohamed suffered a bit in the 3rd, no wonder with what Greg kept throwing back at him. 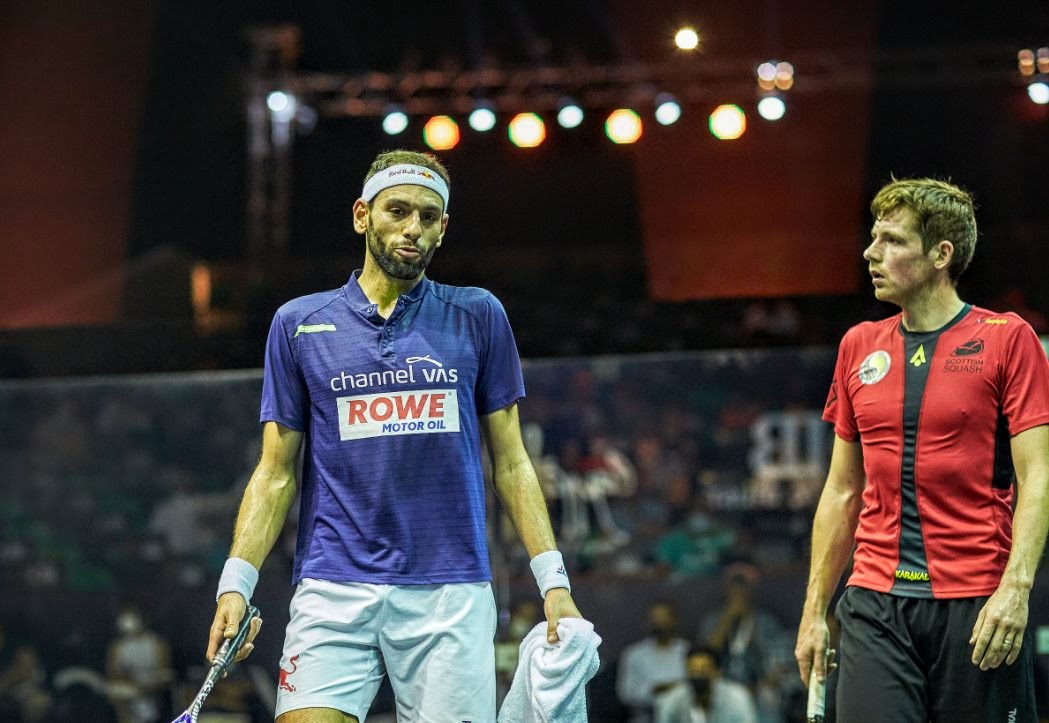 That last game is “de toute beauté” a work of art.

At that point, a video decision, it’s a stroke for the former World Champion that sets a match ball, 11/10. And one is enough, 12/10 with a stroke, confirmed by the video ref.

At some point at the end of that game, Mohamed said something to Greg we couldn’t hear but which seemed to be not of the liking of the Scot. And he made that point very clear to Mohamed at the end of the match…

Mohamed: “I love a physical battle,” 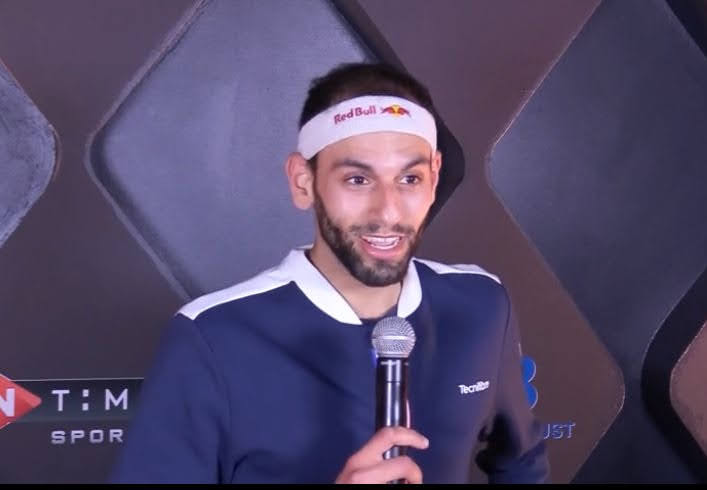 “I think I play at such a high intensity and when you play at a high intensity for a long time I knew I was going to lose focus at some point in the match, it’s very normal for anyone playing at that intensity. I knew that when it happened I wanted to see how I was going to respond. When I was 6-4 up, he came back at me and I felt I got a bit softer, so I had to push myself in the third.

“Going a game ball down, going to a tie-break, I think these are all positive things. It all can get better from here, he played really well in the third, he is a tough player. I’ve watched him so many years, and know how he plays. He played the kind of squash that I needed to play against to get myself sharp for the rest of the tournament.”

Second, Farida didn’t show up. And the third, again very close up to 5/5, but Nour in control and clinical from that point on, another 10m game…

“She’s been giving very tough matches for lots of the top players now. First round and first time to play her, it was difficult in the beginning but really glad I got back to my game plan in the last two games.

“She’s still young and very hungry, wanting to play and get everything back. First time playing an opponent you have never played before the first game is always tense. I was working out what I am going to do and how I’m going to play my game. It took me the first game and then I think I did well in the second and third games.”

Farida: I’m happy with the way I played the first game as I played the way I was told by my coach and my sister. But to be honest, I was a bit overwhelmed with the settings.

When I came this morning, there was nobody, but tonight, I couldn’t warm up on the court, and suddenly, lights, cameras all over, the audience. Suddenly, it got to me.
In the first game, I told myself to think about what was going on on the court, and not outside. And it worked.

But in the second I completely lost focus. Then I became nervous in the third, I tried to dig in but by then, she was too much in confidence…

Forget the first game. Tinne was not in it, and Camille whizzed through in 10m – still long for a one sided score game. 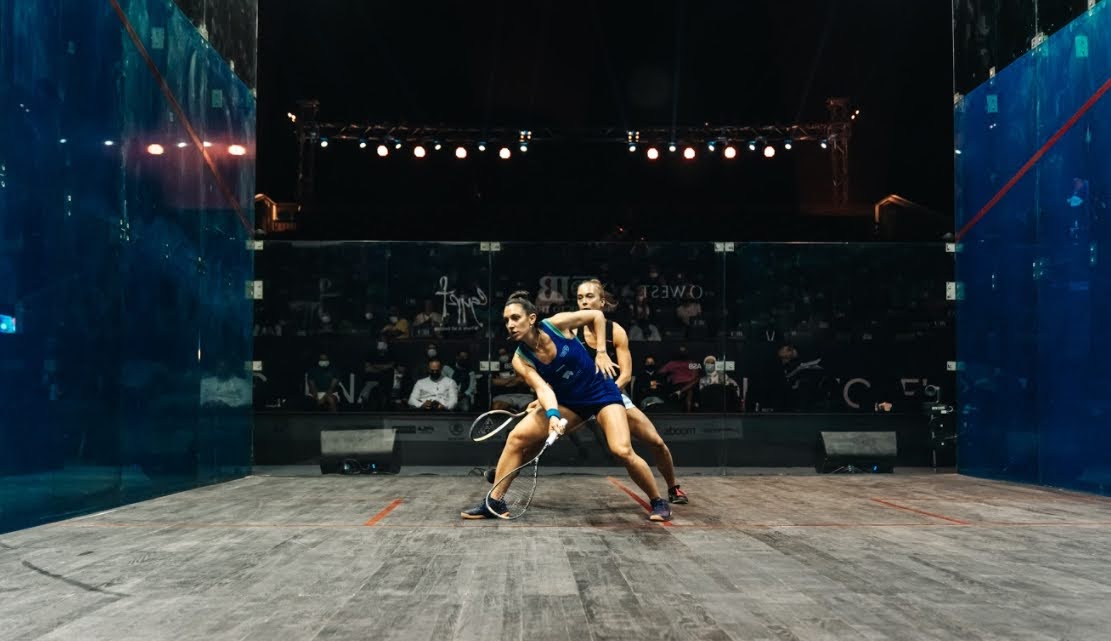 Then the second one. You could write a book about how amazing those two played. Tinne took the game right to Zeurmeu (yes, that’s the way the ref, after more than 10 years on the tour, calls her).

Camille, recovering from two injuries, is trying to get ready for the worlds, which are her aim this time. This event is more about her finding her marks again, and boy, did she did that today!

That second game alone is 22m, and couldn’t have been closer, Camille making a few tired errors courtesy of the hard work and constant attacking from the Belgium, who managed to finally close the game on her third attempt, Cam not having a game ball.

The third is obviously crucial, to be noted that if Camille made 7 UE in the second, the third she dropped down to one, while Tinne didn’t make a single one. Game lasted 20m. Again, couldn’t be any closer, this time, it’s Camille that closes it on her second attempt, 12/10.

The last game, 17m, with Camille taking a great start, 4/0, utilising a little drop of mental energy from the young Belgium. Five points in a row from Tinne, and the lead melts like snow in Gouna. And she keeps the same momentum, 8/5. 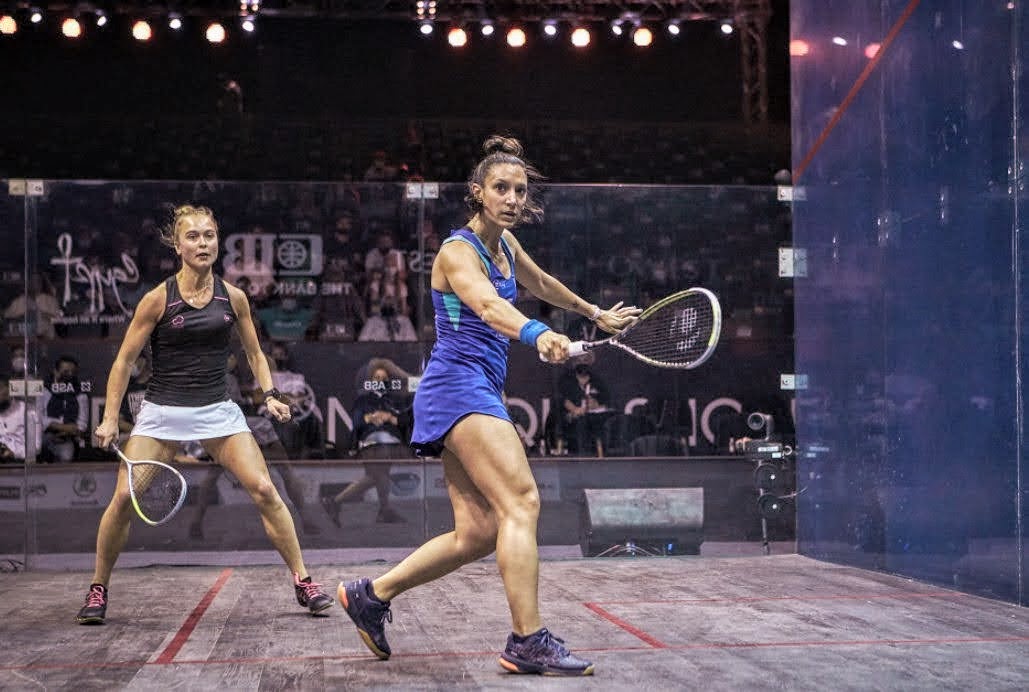 Camille, experience talking, knows she cannot afford a fifth, and digs in, stepping up the court and forcing Tinne to visit the four corners. It pays off, 10/8 match ball, second chance is the good one, 11/9.

What a superb clean, intense, fair, clever, nail biting match that was.

Camille: “I expected a tough match against Tinne

“Because of the Covid rules we have trained together for the last two days, we did play some rallies and I knew it was going to be long rallies and very physical stuff. She had her chance today and played really good squash. I had to work hard physically, mentally and tactically as well. I was trying to play my game, but she was really good today.

“I was trying to be accurate, to find the right opportunities to play my attacking game. She was getting every ball – you play one good shot, two, three and she was getting everything. I thought I would make her tired but right until the last point she was good physically.

“I was a bit lost in the first game and I wasn’t accurate enough. I tried to relax, slow down and find my targets better at the end.” 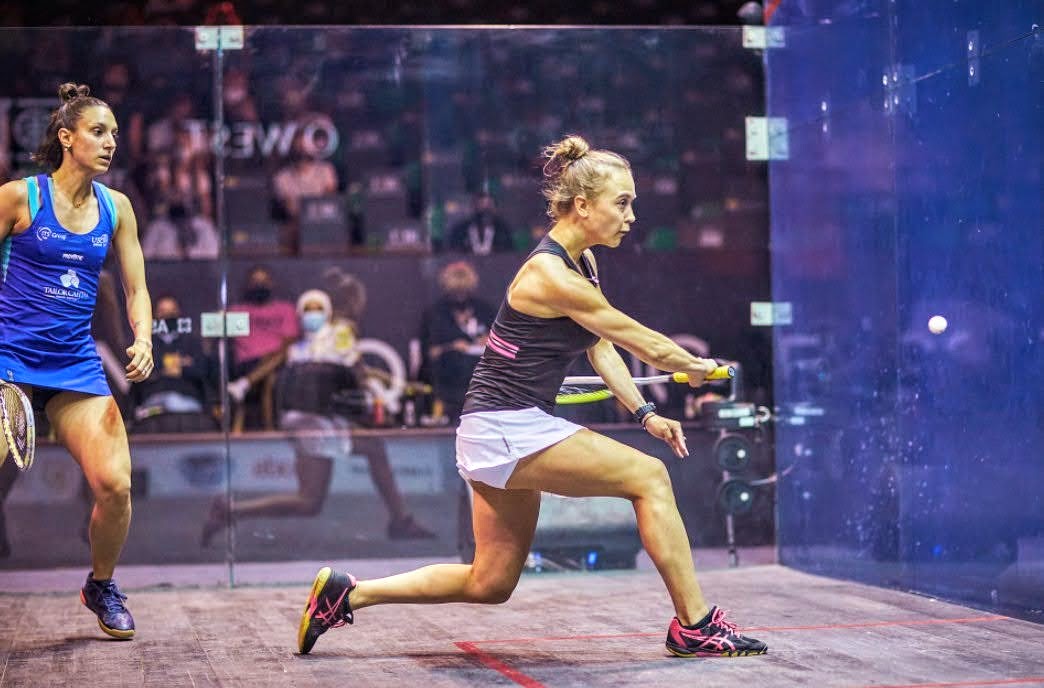 Tinne: I’m training really hard in Nottingham, I have some amazing players around me like Coline, Gina, Lucy, Millie, so it so good to have a lot of female players to play with, it makes such a difference.

Coline and Gina can really push me to the limit, and before a tournament, that’s what I need, I had really tough games with them in training, because I know those matches are going to be tough as well.

A few months ago, I broke down, I was so tired, I was making mistakes, but now I can push myself more, I can keep going and attacking.

And that’s what I did today, I literally gave it my all, I fought for every point, and I’m very happy with the way I played today.