Tarek: Iker has got the game to cause me trouble, the court isn’t exactly dead. But the match went the way I hoped for.

For the past month or so, after Blackball, I decided that I had to step things up a bit, and I started to work on my game to be more physical. I sometimes tend to try to finish matches very quickly to conserve energy and keep my energy for the matches that I know are going to be tough, and I play too short too soon.

So I decided that for an entire month – during Ramadan, I know the only months I shouldn’t do tough physical stuff and at 33! – every match I played, I made sure I made it hard.

Mentally, I don’t know if I’ve improved physically, but mentally, it’s all about getting used to the pace. Like when I used to get long rallies, I panicked, because I was afraid I wouldn’t have energy for the latter rounds. But this time, I have been doing it several times during my practice, and I can sustain it. If I have long rallies, it’s fine, I can wake up tomorrow and play another match.

And today was a perfect match to test it. There were a few long rallies in the middle where I felt I was doing a bit of extra effort and I could feel that this time, it’s not bothering me as much as it used to. That gave me a boost of confidence.

And getting a 3/0 win against Iker is always on a traditional court is a very good result. Because he has been playing well, and he stepped it up, especially in the second game, he started to find his range. And I did well to close that one.

I’m playing the winner of Mazen and Nici. Both of them are completely opposite to Iker, they go for everything. So whatever happens, it might be short!

After a slow start from the young Egyptian – probably getting the lactic acid out of this muscles from last night 80m match against WC Aly – it was a very intense match, with Youssef being very unhappy with the Ref’s decisions and making it very clear. But a strong performance from Youssef, Paul did very well to contain him and not go into a fourth…

Paul : He was really up for it, I had never played him before, but I watched him play and thinking he is a solid player, nice technique, very strong, with more than one shot in his game. I started well, I was 7/3 up, same in the second and third, but he is a fighter and he came back at me at the end of the games.
I had to work for it, I was very happy with the first match, there is a little blood, but nothing really to worry about.

At the end of the third, I think I switched off a little bit, I was pretty relaxed on court, but I have to find the nice balance between being too relaxed, and being too tense. I’m constantly working on that. And when I get it right I feel really good and I can hold it for the rest of the tournament.
Very happy with my first match, unscaved, and feeling good.

Karim: This was the first match since February 2020 where I can walk on court. I had a very tough time. I had three PRP sessions, with 13 injections every session, and I was basically screaming from the pain when I got home. I couldn’t sleep for days, I couldn’t even go to the toilet. It was that bad.

I am very thankful to be back on court. I miss it. And there were moments when I thought I would never be back on court as many many of the doctors said it’s one in a million when that happens; and there is nothing you can do, surgery, treatment. It just can come back.

So I tried cortisone injections that helped with the inflammation to resorb. I also have two different insoles to correct the problem. And it’s much better now.

And I’m just happy to be on court. I don’t care about winning or losing, I just want to play, to be back to my normal life.

Mohamed and I used to play a lot in the juniors, he stopped in the middle and then he came back. We played in BB I think, he was injured, and couldn’t move. But now, he is back and playing amazing. He has improved a lot. It’s hard to stop and then come back.

For me, it was a very tough match, as I haven’t played a lot of tournament. So the mental side of things in matches is not complete back in place yet. It’s hard to keep focusing for three or four games. So I’m happy to get through, to be able to move again, and I am enjoying every moment, I don’t care wining or losing, I’m just enjoying playing and coming back on the Tour, and that’s it. 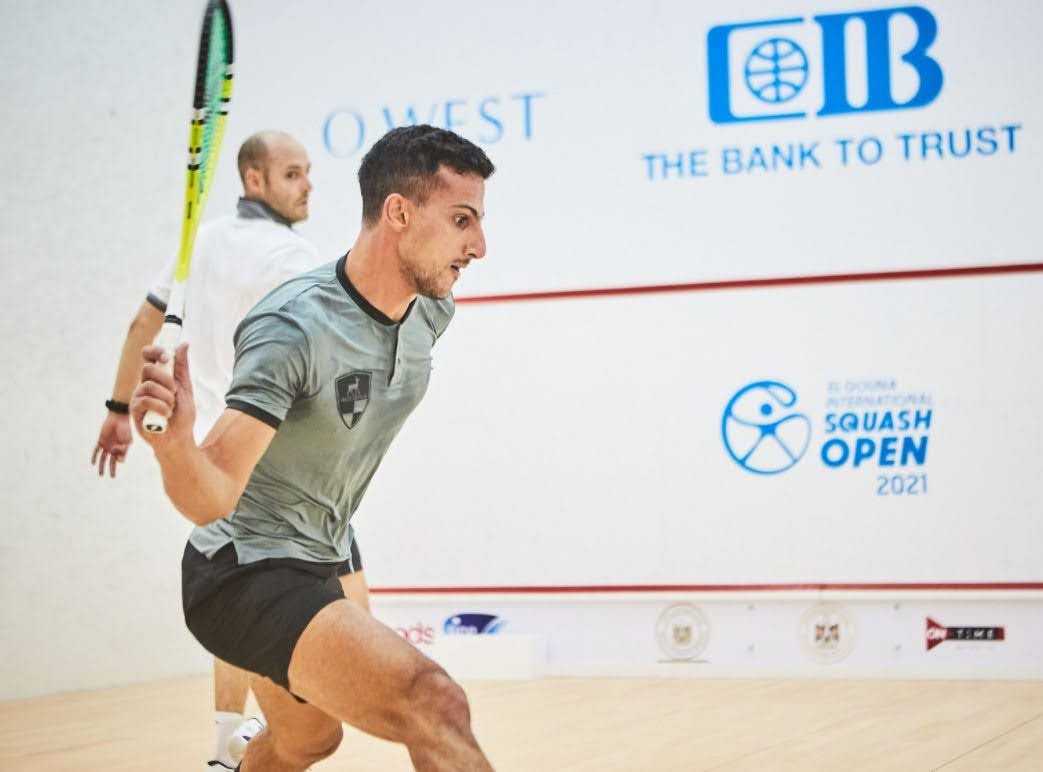 Mazen: I think I was just lucky. He played a few shots in the middle, I got stroke in match balls, then a no let for him .. it was a bit scrappy at the end, we were both very cautious at the end, with nerves, both being patient, we didn’t want to lose.

Just lucky at the end, things could have gone his way.

I have been training really well lately, I’m getting in the tournament very very confident. I feel I’m ready. So maybe that’s why I got nervous today. Not playing any tournaments for two, three months, even if you are training, it’s always tough mentally in the first match.

If you get 2/0 lead it’s fine but if you get down, one, then win one, things get much harder. I’m really happy with the way I hold my nerves. I was pretty tense, but I’m 27, it’s about time I get more mature!!!

I am trying my best and against Nicki today, it’s just luck. And it’s a good win. Hopefully I can back it off, it’s very hard on the body, I did a lot of lunges, so trying to come back fresh in two days.