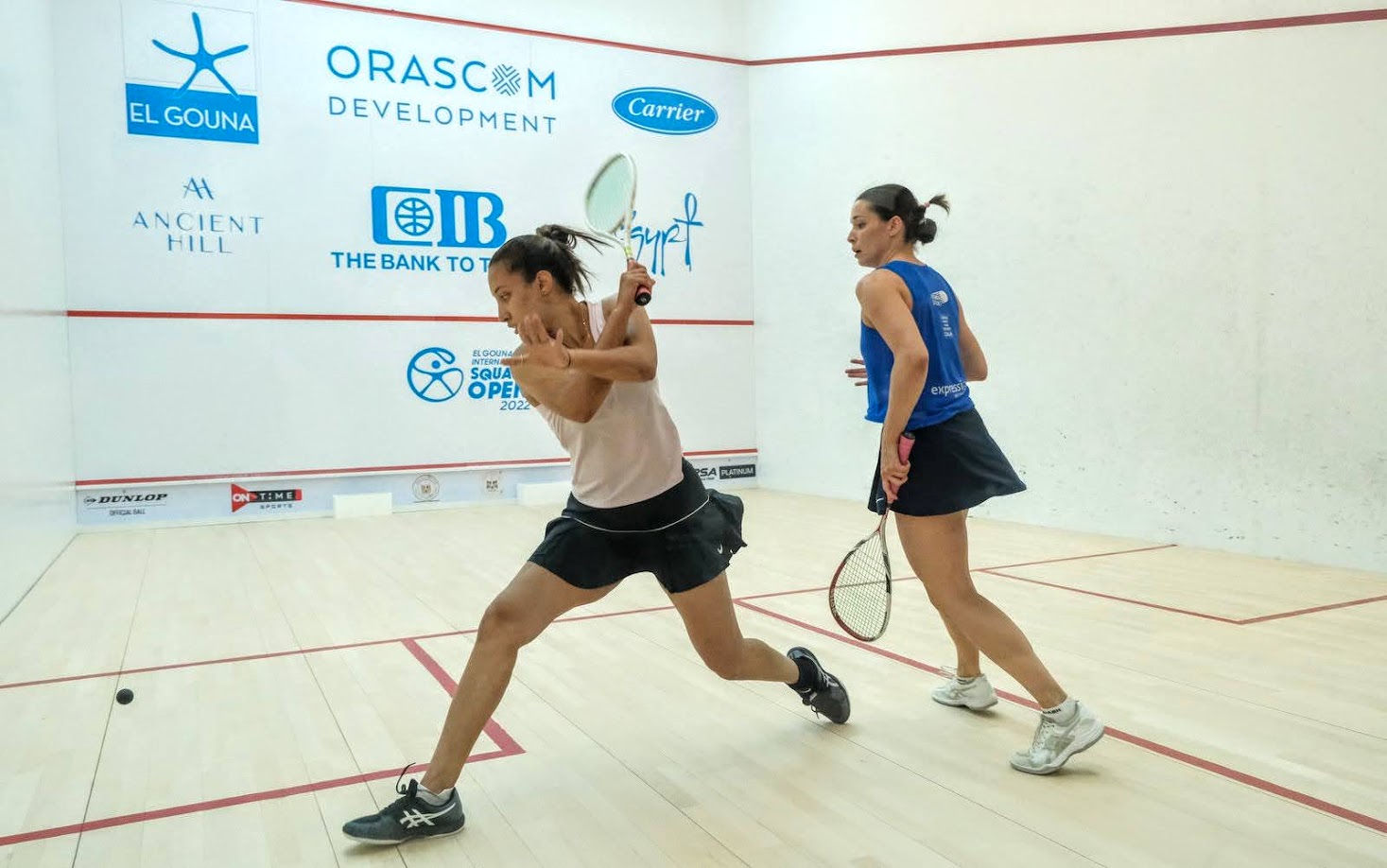 A good start from the Egyptian in the third, 4/1, 6/2, Jas a nice push, back to 6/7. Very intense atmosphere as those two had played recently twice and twice Sana was up 2/0 to lose in 5. On her home ground, Sana wanted that revenge, and made her emotions very very vocal. At some point, it was a bit of a competition with Nour Aboulmakarim next court!

The fifth is a classic God Love Them, not much between them, fast pace, and crispy volley drop shots from Jas, who managed to set up a match ball, 10/9. But it’s the Egyptian that will FINALLY get her revenge, on her 3rd attempt, 14/12.

Never in doubt said her father and mother… NOT.

World No.40 Sana Ibrahim got the better of England’s Jasmine Hutton in an entertaining five-game battle at the El Gouna Squash Complex. It was their third meeting – though their first since 2019 – and Hutton had won both of those matches, with the first of those seeing her come back from two games down to win.

However, this time around Ibrahim was able to get her revenge. The momentum of the match ebbed and flowed, with a high-octane fifth game drawing in rapturous applause from the watching spectators as Ibrahim closed the match out by an 11-4, 9-11, 11-6, 3-11, 14-12 scoreline.

Ibrahim will line up in the second round of this event for the first time and she will take on World No.5 Joelle King for a place in the last 16. 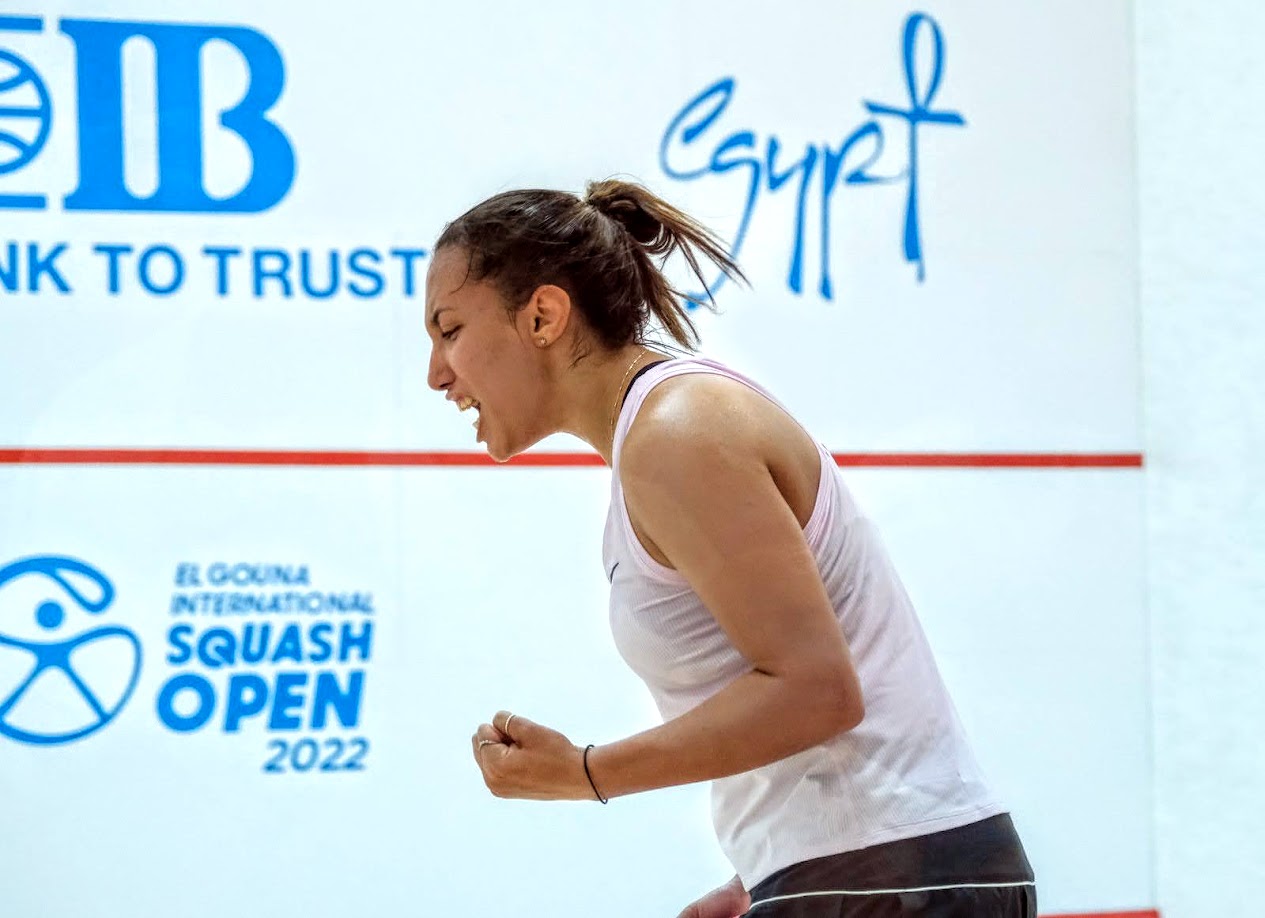 I had played her twice before, and both times I was up 2/0 and lost the matches. I was looking forward to my revenge.

This time, I was much more focused the whole match than in the previous matches. I have lost so many close matches, I wanted to win that one badly. Last year, I lost in the first round here too and it’s the last tournament of the season, so I want to make it count.

I was nervous in the first game, which I won rather easily. And my coach and my dad told me to just play my game, go for my shots, and that if I was trying to play at the back and make it very physical, I would lose. And they told me, even if you are 2-0 down and 10-0, keep playing your squash.

It was the first time I played Joelle in Manchester a few weeks ago. I was not used to the court, or to her squash. I lost in a tough battle 3/1 so I’m looking forward to play here, on my home ground, in different court conditions. I’m so excited to play against her tomorrow at home… Boy does Nour like to express herself on court! I felt a bit like in Wimbledon with Sharapova! But it matches her energy on court. I saw her playing Farida in the worlds, and that was a close encounter.

Today, bless her, Danielle was trying to be as vocal as her opponent, but she has a lot of work on on that department, bless. More seriously, the Canadian did very well to impose her squash today, and never losing focus.

As much as I could, I tried to calm myself down, use some height to slow the ball down, so I could think properly instead of that kind of bash, starting to play my own game.

When we played in Alexandria, I didn’t expect her to be as physical as she was, because we train together, and it felt a bit more freeflowing when we did. So in matches, that first time I was very surprised, but this time I knew what was coming.

The draw changed so many times, I think I play the winner of Rachel and Marie. They are still playing? Excellent, good, perfect, I just hope they play a long match.